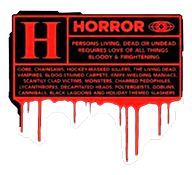 During the Third World War, the American government initiates a secret project code named "Army Bacon" in order to create super soldier by inbreeding human being with pigs. 25 years later a breed called "Muzzles" have occupied top of the food chain, eating and farming humans like animals. Rob Justice is an ex-bounty hunter working for the last line of human resistance - a group of survivors hiding in a nuclear bunker deep underground. His mission is to find out how muzzles came to power and destroy them.

Two female drugs addicts heist a white supremacist safe house but are faced with a decision; take the cash or save a young girl's life.

Steve And The Dead Girl

A necrophiliac looks for love amongst the living.

On halloween night, Rose is finishing up a yearly tradition, while delivering orders, when she runs into a lost masked little girl. And we begin to realize, everything isn't what it seems.

As the rural diner is visited by a strange man, it's patrons quickly learn something terrible follows him. A horrific monster with unique powers gives chase. Those who cross his path learn you can never out run - "Time."