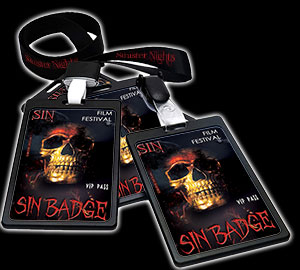 THE BEST WAY TO EXPERIENCE SIN FEST IS WITH A SIN BADGE!

The Sin Badge is a discounted pass to the entire festival and the ONLY way you can get into the Awards Ceremony on Sunday night! There are a VERY limited number of these passes that will be sold and they will sell out FAST! 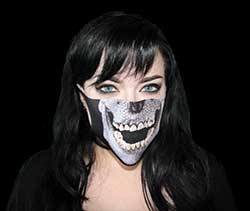 On Halloween Night, Saturday the 31st, join us for the Covid Creature Costume contest! Incorporate a covid mask into your costume and compete for an amazing, SIGNED Jason Voorhees scale model (over $100 value!) courtesy of our friends at Way Back When! 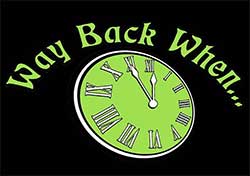 CLICK ON THE DAY YOU WISH TO SEE THE SCHEDULE FOR

'Occupants' is a film about Annie Curtis, an award-winning documentarian and her husband Neil. Annie and Neil embark on a '30 Days of Clean Living' documentary, setting up cameras all over their house to document, via the Internet, their new eating habits. By doing so, half of their cameras capture a parallel version of themselves - a version that ultimately unravels and threatens their very existence.

A troubled young woman is consumed with the yearning to find the perfect man in a crowded NYC dating scene, even if it means building one herself, piece by piece.

A man finds himself strapped into a diabolical chair, chain around his neck and a credit card sewn into his palm - his only means of keeping himself alive.

A story about two stalkers stalking each other for different purposes.

A couple hiking on Valentine's Day finds a woman who needs their help, but will they be willing to risk their lives to save hers?

Two rival mob families are transferred from the Witness Protection Agency by mistake to same California city. In attempt to keep the peace the son of one family must marry the daughter of the other...That is if the zombie apocalypse doesn't get in the way.

Two volunteer EMTs respond to a bizarre crime scene and have to babysit a dead body .

A year after an ominous game turned deadly for her best friend, a college student finds herself struggling to elude a killer who's playing the game over again.

A murderous spirit metes out vengeance on those it believes responsible for it's death by luring their children away.

The Good Things Devils Do

Richard, a small-time gangster is retiring. Before he can, he must take one last job: to steal money from a rival gangster's house. Miles apart, Melvin is a reluctant family man who has dreams of becoming a famous curator for his Museum of the Macabre. His newest acquisition? The remains of the notorious Masquerade, a vampire born from the embers of hell, slain centuries ago. On Halloween Night, their paths will collide and they'll be forced to work together to fight centuries-old evil with everything on the line.

A young woman with a rare condition believes she is responsible for several murders.

A new take on the demonic possession story.

Hail To The Deadites

Inspired by the 1981 classic's cult following, HAIL TO THE DEADITES is a documentary about the fans of the EVIL DEAD franchise. Through interviews with the cast, crew, collectors, fans, freaks and geeks, HAIL TO THE DEADITES seeks to illuminate the darkest reaches of the EVIL DEAD franchise's undying and still-growing popularity, a popularity that has spawned four films, a TV series, comic books, figurines, and surpassed even its creator's wildest dreams. HAIL TO THE DEADITES puts the spotlight on the fans that cultivated and spread this groovy pop-culture infection! It celebrates those who've celebrated the films! So, rev your chainsaws and load your boomsticks, it's time to give the DEADITES some sugar, baby!

Never Hike In The Snow

3 months prior to the events of Never Hike Alone (2017) that follows the strange disappearance of Mark Hill, a Crystal Lake resident who went for a hike in the dead of winter and never came home.

During the Third World War, the American government initiates a secret project code named "Army Bacon" in order to create super soldier by inbreeding human being with pigs. 25 years later a breed called "Muzzles" have occupied top of the food chain, eating and farming humans like animals. Rob Justice is an ex-bounty hunter working for the last line of human resistance - a group of survivors hiding in a nuclear bunker deep underground. His mission is to find out how muzzles came to power and destroy them.

Two female drugs addicts heist a white supremacist safe house but are faced with a decision; take the cash or save a young girl's life.

Steve And The Dead Girl

A necrophiliac looks for love amongst the living.

On halloween night, Rose is finishing up a yearly tradition, while delivering orders, when she runs into a lost masked little girl. And we begin to realize, everything isn't what it seems.

As the rural diner is visited by a strange man, it's patrons quickly learn something terrible follows him. A horrific monster with unique powers gives chase. Those who cross his path learn you can never out run - "Time."

A boy in bed thinks something's escaped the cellar. Suddenly...A deformed face looms over the boy with a harrowing scream. This bad dream remembered by a Man as he shaves making him cut his neck. It bleeds. He wonders 'How many shaving cuts would it take to bleed to death?' He decides, his guest, locked downstairs needs a shave.

Together is a short horror film about solitude and anxiety during self-isolation caused with COVID-19 quarantine in 2020. It tells the story about a girl who is living alone and senses that someone or something else is in her flat.

Nova gets a dreamcatcher as a present from her mom to protect her from bad dreams, but she will soon discover something sinister that hides within.

This is a story about Wicca book. The book which devil plagued mankind with suffering. The all-powerful book of the Witches. But wherever there was evil, wherever an innocent would suffer, there would be Mia.

Hearing the upstairs neighbor couple fight, a young lady senses the wife is in danger. She intends to help the neighbor's wife, but she grows suspicious of strange signs in her behavior and house.

Benoit, 50, is a police lieutenant wounded by the disappearance of his wife, Lise. Unable to perform his grief, he sees his physical and mental health decline when she mysteriously surface again years later. Then, Benoit begins to undergo a strange transformation...

Terror from the light (China)

A girl witnessed a traffic accident which she thought was caused by the light from her car. While parking, she saw something wired standing in front of her. Followed by more bizarre things, the girl realized that these wired things are sending a horrible message to her

Music was his passion... Love was his masterpiece...

Samara has a troubled home life and when push comes to shove, accidents can happen. Life may be tough, but when you unknowingly have an opportunistic stalker on your tail, life becomes that much more complicated and sinister.

** PLEASE NOTE THIS EVENT IS ONLY OPEN TO SIN BADGE HOLDERS **
The awards ceremony will be preceeded by the following shorts:

Can you scare us in 15 seconds? Film-makers from around the word step up to the challenge of creating extremely short films with a rotating list of celebrity judges weighing in every year.

Self-isolated and tucked away in his one-bedroom apartment, Roland prepares to spend the pandemic in quiet quarantine. But thin walls and the unrelenting, unceasing moaning coming from next door is starting to test his patience, as well as his sanity.

A young woman battles the physical manifestation of her pandemic greed.

Quarantine has been extra tough for Jason due to his terrible roommate. Just as he reaches his breaking point, a commercial offering help may be just the ticket. It couldn't get any worse... could it?